The Twickenham Museum
Home / About us

The Aims of The Twickenham Museum

It is 150 years since the first museum was planned for Twickenham. Thomas Twining, a member of the famous family of tea merchants, promoted the building of a technical museum with an educational purpose. This was opened in 1860 and was manned by volunteers. It was destroyed by fire in 1871 and was not rebuilt.

Between 1897 and 1922 the private collections of the Duc d'Orleans and Sir Ratan Tata, the Indian industrialist and philanthropist (and the last private owner of York House), were displayed at York House.

In 1904 the Borough Council bought Radnor House, intending to incorporate a museum. It took until 1913 to start it and even then it was used primarily as a store for donations awaiting permanent display. The house was destroyed by a bomb in 1940.

After purchasing York House in 1924, the Council opened a small museum there, manned by volunteers. This closed in 1939 at the outbreak of the Second World War.

It was not until the closing decades of the last century that there were informal discussions within local societies towards re-creating a museum to exhibit, record and celebrate life in Twickenham, Whitton, Teddington and the Hamptons - the villages which once formed the Borough of Twickenham.

In 1993 the Twickenham Museum became a Registered Charity (no.1028984). It later inherited no 25 The Embankment, Twickenham, the property which is the museum.

The house faces the river and is adjacent to the Parish Church of St Mary the Virgin in the oldest part of Twickenham. It stands on the local history trail which runs from Richmond Bridge to Twickenham. It was built around 1720 and is listed Grade 2.

The site continues to be developed. New material is being added.There are now more than 400 individual articles. 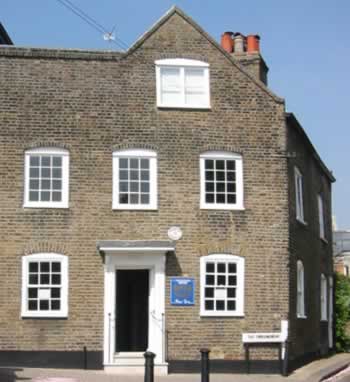 Photo of museum building (25 The Embankment). 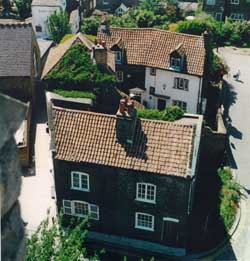 Photo of museum building from the tower of St Mary's Church.