Many of the People and Places entries on the website give suggestions for further reading. These include publications not specific to the area such as the Dictionary of National Biography (DNB). The new DNB can be consulted online, either by direct subscription or through the Borough Library Service (LBRUT) by those who have a membership card and a pin card for logging in.

The publication of the Borough of Twickenham Local History Society show known publications on the history of the area covered by the museum. Many of these are out of print but most should be available for research at the Local Studies Library in Richmond or in the Museum. Books in print can be obtained through reputable booksellers.

The Museum has a comprehensive selection of local history books for sale.  Contact us for further information.

General enquiries or requests for information can first be addressed to:

The museum is unable to help with family history research but the following notes may be of help to those seeking genealogical assistance.

Family History in Twickenham and Whitton

Specific enquiries which relate to entries in the registers of baptisms, marriages and burials for the parish of St Mary the Virgin, Twickenham, starting in 1538 can be addressed to the St. Mary's Archivist:

If writing, a stamped addressed envelope should be sent and it is likely that a starting donation of Â£10.00 to church funds will be requested. Many of the registers have been transcribed. Indexed copies are held at the Society of Genealogists in London where they can be consulted by non-members for a fee:

The original parish was sub-divided as the population grew. Other parishes in Twickenham where records were kept are:

Nonconformist groups include Wesleyan Methodists from before 1800, Baptists from 1847, Congregationalists from 1812, now the United Reformed Church, all meeting in private houses before building their chapels. The local history has been covered in Protestant Nonconformity in Twickenham, Whitton, Teddington, and The Hamptons, by P D Barnfield, paper no59 of the Borough of Twickenham Local History Society, 1987. This book is available at the Local Studies Collection. See also the museum’s web page on Joanna Southcott for information about the Southcottians.
Many non-conformist records are kept at the Public Record Office, Kew. It should be noted that following the Marriage Act of 1836 weddings could take place in non-conformist chapels as well as in parish churches.

When the parochial burial grounds were closed (c1880) a new cemetery was opened at Whitton. With others in the borough it is now under the administration of the Borough Council and enquiries should be addressed to: The London Borough of Richmond upon Thames, Sheen Cemetery, Sheen Road, Richmond, tel: 020 8876 4511, website, email.

The Registers of Baptisms, Marriages and Burials for the Parish of St Mary's with St Albans (formerly St Mary 's) have been deposited at the London Metropolitan Archives. All date from about 1558.

The burial ground at St Mary's Church, Ferry Road, Teddington, was closed in about 1875 and the cemetery at Shacklegate Lane was opened and is under the administration of the Richmond Borough Council, as noted above.

The Manorial Records giving the exchange of ownership of all copyhold land in the old manor of Teddington are held at London Metropolitan Archives, together with other material.

Family History in the Hamptons

Hampton, Hampton Hill and Hampton Wick were all part of the Anglo-Saxon parish of Hampton. This remained the case until 1831 when St Mary's, Hampton, was rebuilt and a new church (St John's) was built for the newly formed parish of Hampton Wick. Hampton Hill (earlier known as New Hampton) became a separate parish with its own church, St James's, in 1863 with its own churchyard burial ground. Continued expansion at the north-western corner of Hampton led to the formation of another parish, that of All Saints, with a new church consecrated in 1908.

Registers for St John the Baptist, Church Grove, Hampton Wick that are held at the London Metropolitan Archives include Baptisms 1831-1967 and Marriages 1832-1955.

Earlier registers (dates unknown) for St James's Church, St James Road, Hampton Hill are held at the London Metropolitan Archives. Records for All Saints Church, 44 The Avenue, Hampton, are held by the Church.

The St Mary's churchyard burial ground closed in 1883 (except for burials for previously allocated spaces) and a new cemetery was opened in Holly Bush Lane, Hampton. The latter is under the administration of the London Borough of Richmond upon Thames.

We have a limited number of items for sale in the museum. These will be available for purchase via this website soon.

The society has a number of publications that can be ordered via its website.

The BBC History website provides lots of information on 'how to do history'. 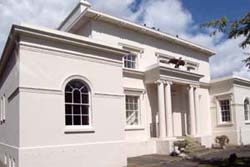 Visit this ongoing survey of houses of local interest and their occupiers.